September is one of our favorite times of the year as many fish reach their peak size and fattiness from feeding all summer long! This month we’re indulging in local king salmon from Port Angeles, fresh barracuda nigiri, and the autumn return of katsuo (bonito) fish. We’re also bringing in cedar barrel-aged sake and diving into the tradition of Gunkan Nigiri this September.

Masunosuke (Local King Salmon) – King salmon is the largest of all the salmon species with an especially high fat content. It’s definitely the king of salmon when it comes to flavor, too! This fatty fish is only available at certain times of the year, and right now we are getting our local king salmon from nearby Port Angeles, WA. Now is the perfect time to indulge in this limited-time, extraordinary fish! 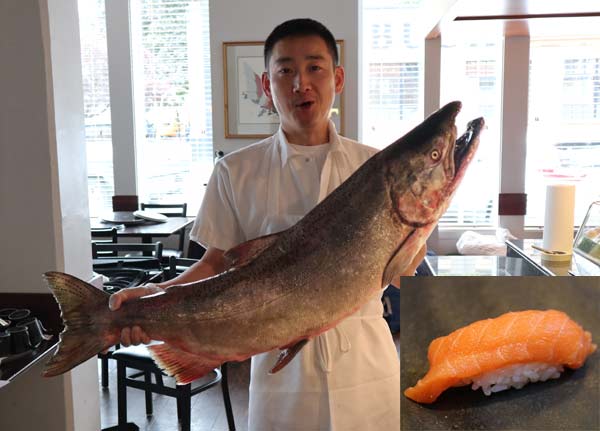 Kamasu (Barracuda) – Kamasu is a very fast predatory fish that can swim upwards of sixty miles per hour and reach up to five feet in length! The best kamasu comes from Kanagawa prefecture just south of Tokyo. It’s usually served with some of its skin still on, lightly seared for a tasty, mild flavor. Deservingly popular, the season for barracuda is late-summer and fall as it takes on a fatty, meaty flavor and texture. Try it while it’s fresh on our menu!

Modori-Gatsuo (Returning Bonito) – There are two versions of the fish – one is “Hatsu-Gatsuo” (first season bonito) and the other is “Modori-Gatsuo” (returning bonito). The first season of Bonito is in the spring when it is fresh and lean. As the water gets colder towards autumn, Bonito begin migrating down to the south, feasting on sardines all summer and becoming larger and fattier “Modori-Gatsuo.” Japanese people enjoy this version because the taste and texture are very different from “Hatsu-Gatsuo.” The contrast of “Hatsu-Gatsuo” and “Modori-Gatsuo” is just like that of lean tuna (akami) and fatty tuna (toro). 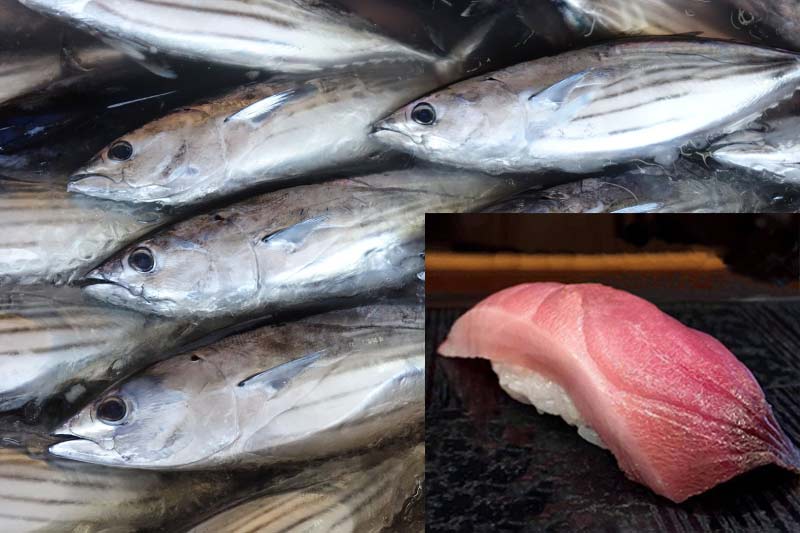 From the beginning of the Edo Period to the end of the Meiji Period (17th – 19th centuries), all sake was aged in cedar barrels called taru. In those days, sake was simply called tarusake. In 1964, Choryo Brewing (known as the birthplace of sake) began making special cedar barrels from Japanese cedar trees to age their sake. Since then, for almost 50 years, sake has been made in the same traditional way. 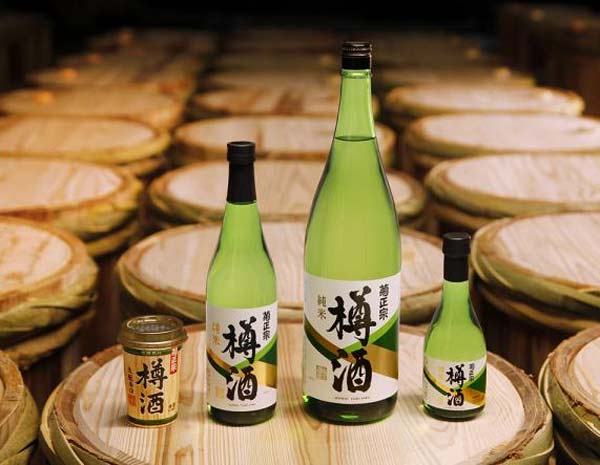 There are two types of nigiri sushi: one is the authentic style nigiri which consists of seasoned rice and a sliced ingredient on top. The other type is gunkan nigiri which is made by wrapping seasoned rice with a strip of dried seaweed (nori), topping the rice with an ingredient such as salmon roe (ikura) or sea urchin (uni) that is kept in place by the nori. “Gunkan” (軍艦) translates to battleship in Japanese, deriving its name from the side view of the nigiri, which looks similar to a battleship.

Pickled ginger has another great benefit! When you eat sushi that includes wasabi that is too strong, quickly bite a slice of pickled ginger, which will neutralize the pungency of wasabi. 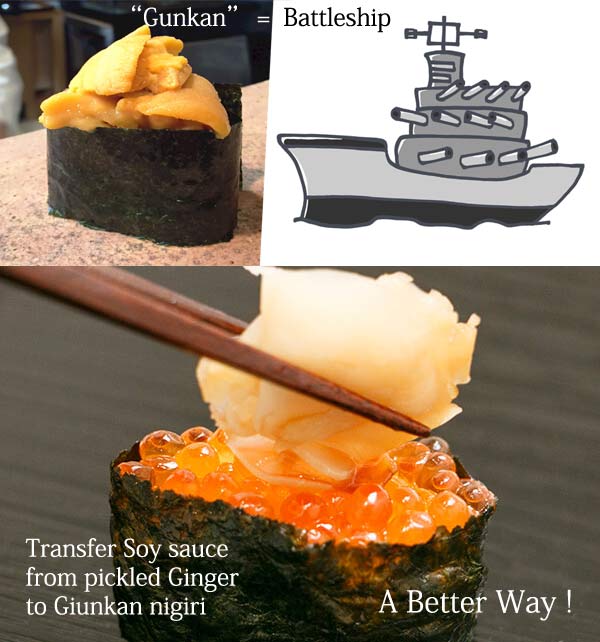