Despite the cold, there is a theme of love and devotion in February, bringing us high spirits in late winter. This month we’re celebrating that theme with special menu items to indulge in. Enjoy our seasonal fish ankimo, or monkfish liver, often referred to as the foie gras of the sea. Reserve for our decadent seven-course Valentine’s Day menu and learn why the Japanese call soy sauce “Murasaki,” the same name for the color purple.

Ankimo (Monkfish Liver) – Ankimo (monkfish liver) has many different names in English including: Sea devil, goosefish, anglerfish, and frog fish. These nicknames are supposedly because of its rather grotesque appearance. However, it is no doubt one of the most charmed winter fish!

At Shiro’s we serve boiled monkfish liver. It’s considered the foie gras of the sea! Ankimo’s rich taste comes from its high fat content of 40% compared to 2% for sea bream or 3% for tuna. Ibaraki and Yamaguchi are popular areas for ankimo in Japan, but really tasty ankimo is produced in Hokkaido where monkfish tends to accumulate more fat. Interestingly, Japan is not the only country that enjoys ankimo as the French and Spanish also eat plenty of it!

At Shiro’s we serve the highest quality ankimo from Hokkaido, Japan. Find out for yourself if it deserves to be called the foie gras of the sea!

Valentine’s Day is well-known throughout the world, not just in the U.S., but also in Japan. While its popularity is high in Japan, Japanese restaurants don’t often celebrate it. However, here at Shiro’s, we invite you to celebrate with us!

This year, we present a special Valentine’s seven-course menu featuring a variety of fresh fish, and savory dishes! Indulge your senses, pique your curiosity, and enjoy this one-of-a-kind menu with someone special: 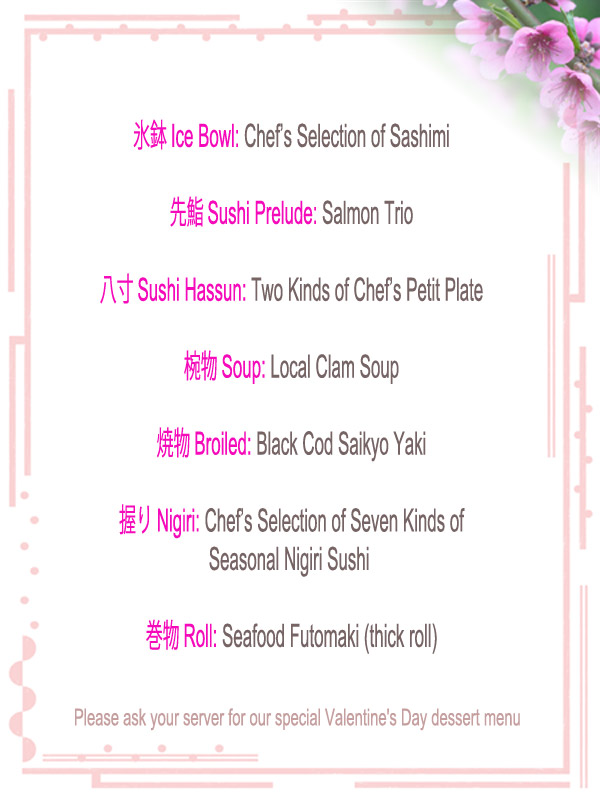 The brand “Bon” (Born) is translated in Sanskrit to “spotless purity” and “truthfulness,” but they decided to name this one-of-a-kind sake in English as Born, expressing “birth” and “creation” for the future. Born has received many awards, including the gold prize at the 2016 Sake Awards!

Using only Yamada Nishiki and Gohyakumangoku Mai rice with the spring water of the Hakusan Mountain Range, “Born Junmai Daiginjo” is aged for one year at 14-degrees Fahrenheit, bottled right at the time of dispatch to make it as fresh as possible. 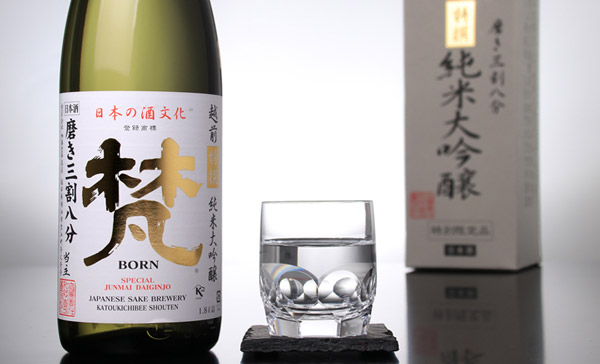 At the sushi bar, Japanese people often call soy sauce “murasaki”. Murasaki means purple in Japanese and purple was a noble color exclusively used by the members of the Imperial family.

It is no longer an expensive seasoning, and the flavor is much better than in the Edo period, but people still have a lot of respect for this delicious seasoning that makes sushi and sashimi stand out. 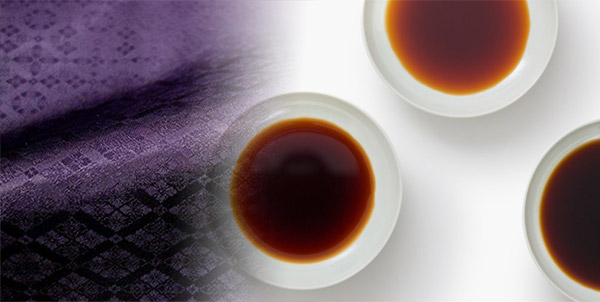 Our Head Sushi Chef, Jun, has been with Shiro’s for six years, but has been preparing sushi and cooking Japanese cuisine for 13 years. Jun enjoys aji (Japanese horse mackerel) and kinmedai (splendid alfonsino) sushi and pairs them with sake from the Kokuryu Brewery in Fukui, Japan. Although Jun loves sushi, his favorite meals to cook at home are udon soup and ramen. When he’s not at Shiro’s, he can be found outside golfing or fishing.