Kaki (Oysters) – Shiro’s is serving local oysters from our own Puget Sound, with a little twist. This delicious marinated oyster is served with a bit of Yuzu-Kosho (yuzu flavored Japanese pepper) on top. 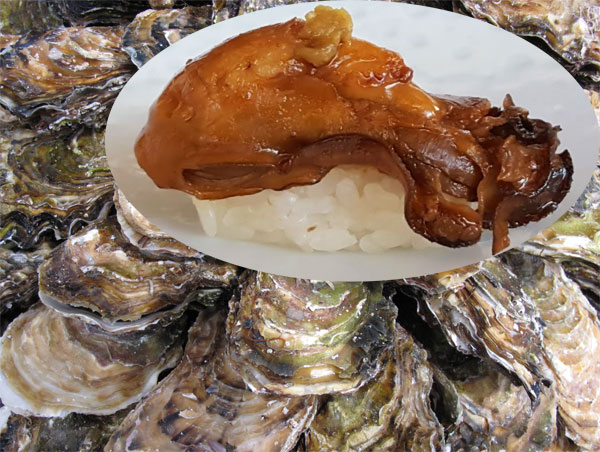 Kanpachi (Amberjack) – The English terms for Hamachi and Kanpachi are “yellowtail” and “amberjack”, respectively, but because yellowtail can also be called “Japanese amberjack”, overseas sushi diners sometimes think they’re the same fish. Though they are both members of the “jack” family, they are different species. Kanpachi literally means “eight in the center” and it is named because it has a mark resembling the Japanese Kanji character for eight, “hachi” (八) (also pronounced “pachi”), between the eyes. Its body is rounder than yellowtail with a reddish hue to the skin on the upper body. 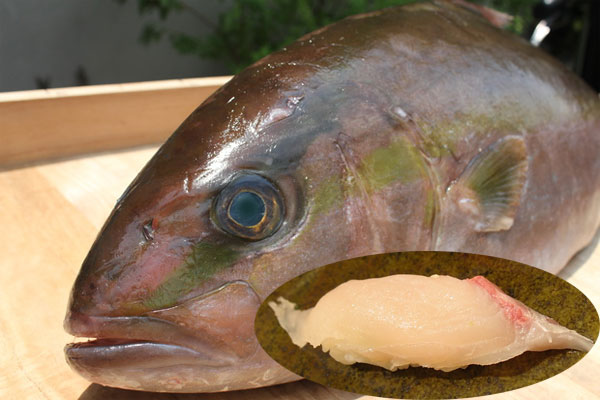 Unagi (Fresh Water Eel) – In Japan, Unagi (fresh water eel) has been a very popular ingredient. Usually, it is barbecued and served on top of steamed rice. It’s very flavorful and tasty!
There is a tradition in Japan where people head to Unagi restaurants on hot summer days to eat barbecued Unagi to overcome summer fatigue. This is because Unagi is rich in Vitamin A, B and other vital nutrients.
Unagi is served differently in Eastern Japan from Western Japan. In Western Japan, Unagi is butterflied along the belly, whereas it is slit open along its back. In Eastern Japan, especially in Tokyo. Tokyo was a city of Samurai where slashing bellies was considered a taboo. In either way of preparation though, barbecued Unagi is incredibly rich and delicious! 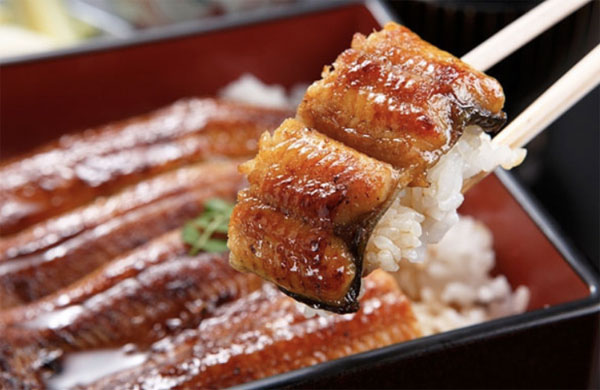 Tasting Notes: The Kubota line’s limited Ginjo Genshu, an undiluted sake, is a refreshing brew of elegance and power which can pair easily with a ground array of dishes. This sake is rich with umami, yet clean and refreshing and has a light ginjo aroma.

Miso Soup – The Japanese drink miso soup almost every day with different ingredients. Miso soup is very simple, yet a very delicious and flavorful soup packed with umami. The ingredients required to make miso soup are Dashi stock, miso paste, and a few other ingredients of your choosing. Finish the miso soup with garnishes with Suikuchi. Suikuchi is fragrant garnish which enhances the miso soup taste. Green shallots are often and most commonly used but there are many others. For example, mitsuba, shiso, mustard, shichini togarashi, sesame seeds, ginger, yuzu, and others. They all have a lovely fragrance and enhance the miso soup flavor. Enjoy fresh miso soup at Shiro’s made with local Washington ingredients. Right now, you can get our miso soup made with Washington State Walla Walla Sweet Onions. This particular variety of onion is named for the Walla Walla region in Washington. The onion is very sweet, not pungent, and is delicious in miso soup. The photo here shows the difference in size between a Walla Walla Sweet Onion and a regular onion. 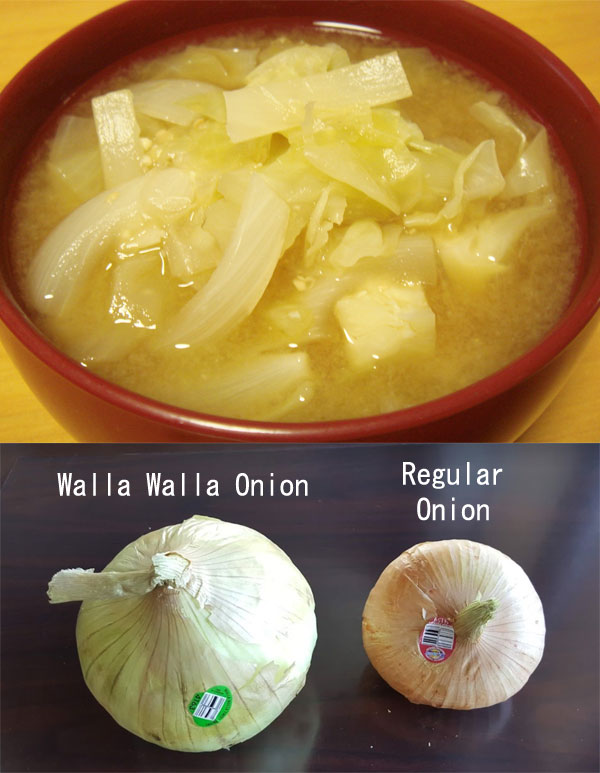 August 18 (Sat) @ 16:00: This year Shiro’s has joined the Auction of Washington Wines (AWW) Social Hour Event in raising money for Seattle Children’s Hospital, the Viticulture and Enology Program at WSU, and the AWW Industry Grant Program. The AWW was established in 1988 with a goal of supporting growth and global awareness of Washington’s wine industry through a series of celebrated events. This time AWW invites guests to join them for an evening at Chateau Ste Michelle Winery, where they can sample wines and food from various tasting bars. Find Shiro’s very own Chef Aaron Pate on Chateau Ste Michelle’s lawn during AWW’s Social Hour Event!

The American addition to the team, Aaron is from Hawaii and started making Sushi in 1996 at San Sei in Maui where he remained for 13 years. From 2009-2011, he lived in Japan and worked at Nishi-Azabu Gonpachi in Tokyo. He returned to Seattle in 2011 where he worked for Seattle restaurants Kisaku, Marinepolis Sushi Land, and Nishino. He joined Shiro’s as a chef in May of 2014.

Chef Pate will be serving Oshi Sushi, meaning “pressed sushi” or “box sushi,” which is one of the oldest forms of sushi to date. Pate will be offering two different preparations of salmon; Sockeye Salmon with sliced lemon and Seared Salmon with Japanese daikon radish. 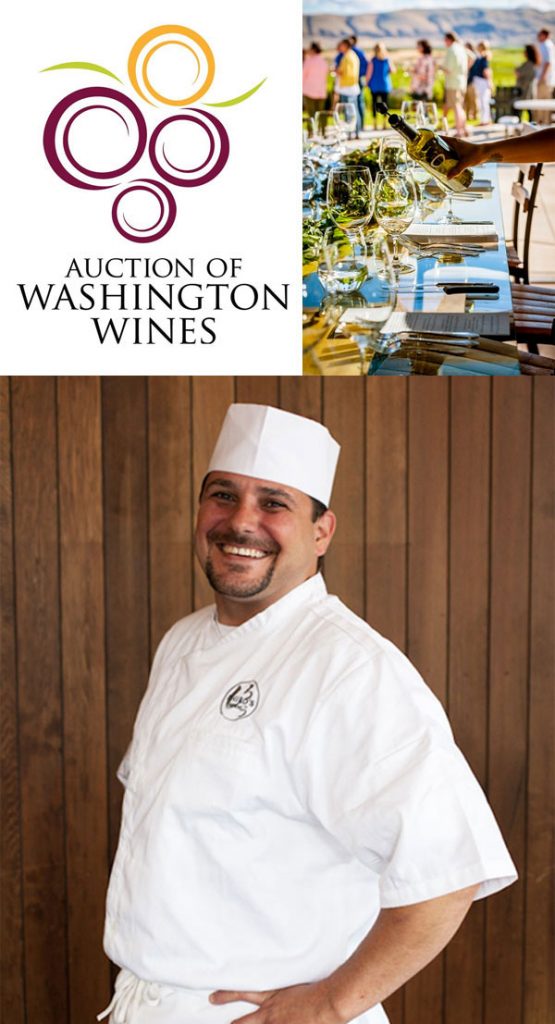 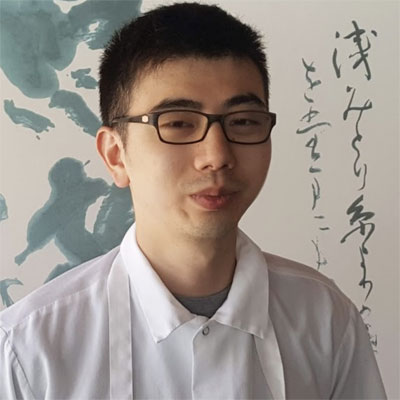 Profiling your favorite sushi chefs with a short interview

What is your favorite sushi/beverage pairing?
Japanese strong sencha green tea would go very well with any kind of sushi.

What is your favorite non-Shiro’s dish (i.e. either at a restaurant, what you enjoy at home, etc.)?
My girlfriend’s cooking, especially her stews and desserts. Even though I don’t have a sweet tooth, her strawberry short cake is my favorite cake and the best in Seattle. Also, I could probably eat toasted English muffin topped with butter and salmon roe every day for breakfast.

What are your hobbies?
I am an avid gamer. I’ve been playing video games for a long time. I enjoy building and tinkering with my PC and play my fair share of games on my PS4. I’m currently playing Overwatch, Counter Strike, and Pubg on PC.  I’m trying to finish Yakuza 1 and 6 before 2 will be released at the end of July. I’m huge fan of the Battlefield franchise and excited for the release of V. I enjoy watching movies (anything but horror movies), anime, and airsoft when I have time.

What is your favorite time of year (here or in Japan) and why?
I’m all about winter time. I enjoy hot pots, snowboarding, and my cat likes to snuggle up during cold days. I like Spring time in Japan. There’s nice weather, good food and lots of cherry blossoms. I’m happy as long as it’s not too hot.

Anything else fun or interesting that you’d like to share with guests?
I come from a family of engineers and professors and they take a hands-on approach to many things. Food is very hands-on, and since there is never an end to perfection you can continue to grow forever.